Sermon – “A Bondservant of Christ” 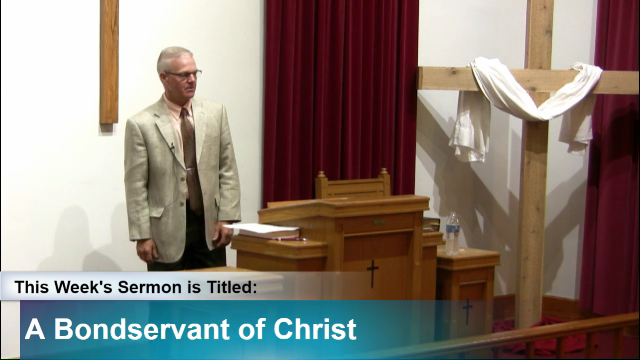 Paul, a bondservant of Jesus Christ, called to be an apostle, separated to the gospel of God 2 which He promised before through His prophets in the Holy Scriptures, 3 concerning His Son Jesus Christ our Lord, who was born of the seed of David according to the flesh, 4 and declared to be the Son of God with power according to the Spirit of holiness, by the resurrection from the dead. 5 Through Him we have received grace and apostleship for obedience to the faith among all nations for His name, 6 among whom you also are the called of Jesus Christ;

And He sat down, called the twelve, and said to them, “If anyone desires to be first, he shall be last of all and servant of all.”

“Now these are the judgments which you shall set before them: 2 If you buy a Hebrew servant, he shall serve six years; and in the seventh he shall go out free and pay nothing. 3 If he comes in by himself, he shall go out by himself; if he comes in married, then his wife shall go out with him. 4 If his master has given him a wife, and she has borne him sons or daughters, the wife and her children shall be her master’s, and he shall go out by himself. 5 But if the servant plainly says, ‘I love my master, my wife, and my children; I will not go out free,’ 6 then his master shall bring him to the judges. He shall also bring him to the door, or to the doorpost, and his master shall pierce his ear with an awl; and he shall serve him forever.

8 To me, who am less than the least of all the saints, this grace was given, that I should preach among the Gentiles the unsearchable riches of Christ,

9 For this is the word of promise: “At this time I will come and Sarah shall have a son.”

10 And not only this, but when Rebecca also had conceived by one man, even by our father Isaac 11 (for the children not yet being born, nor having done any good or evil, that the purpose of God according to election might stand, not of works but of Him who calls), 12 it was said to her, “The older shall serve the younger.” 13 As it is written, “Jacob I have loved, but Esau I have hated.”

19 Or do you not know that your body is the temple of the Holy Spirit who is in you, whom you have from God, and you are not your own? 20 For you were bought at a price; therefore glorify God in your body and in your spirit, which are God’s.

13 Then Ananias answered, “Lord, I have heard from many about this man, how much harm he has done to Your saints in Jerusalem. 14 And here he has authority from the chief priests to bind all who call on Your name.”

15 But the Lord said to him, “Go, for he is a chosen vessel of Mine to bear My name before Gentiles, kings, and the children of Israel.

11 And have no fellowship with the unfruitful works of darkness, but rather [a]expose them. 12 For it is shameful even to speak of those things which are done by them in secret.