Sermon – “That You May Know” 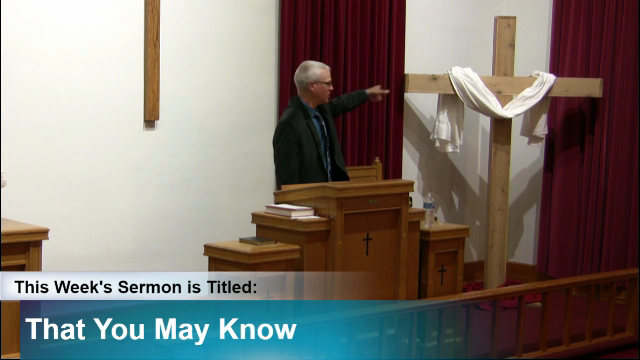 Whoever believes that Jesus is the Christ is born of God, and everyone who loves Him who begot also loves him who is begotten of Him. 2 By this we know that we love the children of God, when we love God and keep His commandments. 3 For this is the love of God, that we keep His commandments. And His commandments are not burdensome. 4 For whatever is born of God overcomes the world. And this is the victory that has overcome the world—our faith. 5 Who is he who overcomes the world, but he who believes that Jesus is the Son of God?

6 This is He who came by water and blood—Jesus Christ; not only by water, but by water and blood. And it is the Spirit who bears witness, because the Spirit is truth. 7 For there are three that bear witness in heaven: the Father, the Word, and the Holy Spirit; and these three are one. 8 And there are three that bear witness on earth: the Spirit, the water, and the blood; and these three agree as one.

Now faith is the substance of things hoped for, the evidence of things not seen. 2 For by it the elders obtained a good testimony.

4 By faith Abel offered to God a more excellent sacrifice than Cain, through which he obtained witness that he was righteous, God testifying of his gifts; and through it he being dead still speaks.

There was a man of the Pharisees named Nicodemus, a ruler of the Jews. 2 This man came to Jesus by night and said to Him, “Rabbi, we know that You are a teacher come from God; for no one can do these signs that You do unless God is with him.”

3 Jesus answered and said to him, “Most assuredly, I say to you, unless one is born again, he cannot see the kingdom of God.”

4 Nicodemus said to Him, “How can a man be born when he is old? Can he enter a second time into his mother’s womb and be born?”