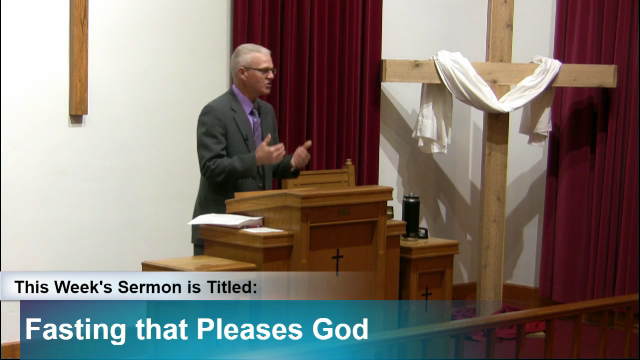 “Shout with the voice of a trumpet blast.
Shout aloud! Don’t be timid.
Tell my people Israel of their sins!
2     Yet they act so pious!
They come to the Temple every day
and seem delighted to learn all about me.
They act like a righteous nation
that would never abandon the laws of its God.
They ask me to take action on their behalf,
pretending they want to be near me.
3 ‘We have fasted before you!’ they say.
‘Why aren’t you impressed?
We have been very hard on ourselves,
and you don’t even notice it!’
“I will tell you why!” I respond.
“It’s because you are fasting to please yourselves.
Even while you fast,
you keep oppressing your workers.
4 What good is fasting
when you keep on fighting and quarreling?
This kind of fasting
will never get you anywhere with me.
5 You humble yourselves
by going through the motions of penance,
bowing your heads
like reeds bending in the wind.
You dress in burlap
and cover yourselves with ashes.
Is this what you call fasting?
Do you really think this will please the Lord?
6 “No, this is the kind of fasting I want:
Free those who are wrongly imprisoned;
lighten the burden of those who work for you.
Let the oppressed go free,
and remove the chains that bind people.
7 Share your food with the hungry,
and give shelter to the homeless.
Give clothes to those who need them,
and do not hide from relatives who need your help.
8 “Then your salvation will come like the dawn,
and your wounds will quickly heal.
Your godliness will lead you forward,
and the glory of the Lord will protect you from behind.
9 Then when you call, the Lord will answer.
‘Yes, I am here,’ he will quickly reply.
“Remove the heavy yoke of oppression.
Stop pointing your finger and spreading vicious rumors!
10 Feed the hungry,
and help those in trouble.
Then your light will shine out from the darkness,
and the darkness around you will be as bright as noon.
11 The Lord will guide you continually,
giving you water when you are dry
and restoring your strength.
You will be like a well-watered garden,
like an ever-flowing spring.
12 Some of you will rebuild the deserted ruins of your cities.
Then you will be known as a rebuilder of walls
and a restorer of homes.
13 “Keep the Sabbath day holy.
Don’t pursue your own interests on that day,
but enjoy the Sabbath
and speak of it with delight as the Lord’s holy day.
Honor the Sabbath in everything you do on that day,
and don’t follow your own desires or talk idly.
14 Then the Lord will be your delight.
I will give you great honor
and satisfy you with the inheritance I promised to your ancestor Jacob.
I, the Lord, have spoken!”

27 “Woe to you, scribes and Pharisees, hypocrites! For you are like whitewashed tombs which indeed appear beautiful outwardly, but inside are full of dead men’s bones and all uncleanness. 28 Even so you also outwardly appear righteous to men, but inside you are full of hypocrisy and lawlessness.

31 “When the Son of Man comes in His glory, and all the holy angels with Him, then He will sit on the throne of His glory. 32 All the nations will be gathered before Him, and He will separate them one from another, as a shepherd divides his sheep from the goats. 33 And He will set the sheep on His right hand, but the goats on the left. 34 Then the King will say to those on His right hand, ‘Come, you blessed of My Father, inherit the kingdom prepared for you from the foundation of the world: 35 for I was hungry and you gave Me food; I was thirsty and you gave Me drink; I was a stranger and you took Me in; 36 I was naked and you clothed Me; I was sick and you visited Me; I was in prison and you came to Me.’