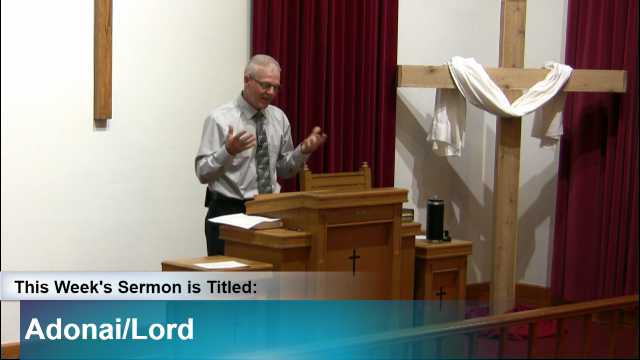 The Lord reigns;
Let the earth rejoice;
Let the multitude of isles be glad!

2 Clouds and darkness surround Him;
Righteousness and justice are the foundation of His throne.
3 A fire goes before Him,
And burns up His enemies round about.
4 His lightnings light the world;
The earth sees and trembles.
5 The mountains melt like wax at the presence of the Lord,
At the presence of the Lord of the whole earth.
6 The heavens declare His righteousness,
And all the peoples see His glory.

7 Let all be put to shame who serve carved images,
Who boast of idols.
Worship Him, all you gods.
8 Zion hears and is glad,
And the daughters of Judah rejoice
Because of Your judgments, O Lord.
9 For You, Lord, are most high above all the earth;
You are exalted far above all gods.

18 That men may know that thou, whose name alone is Jehovah, art the most high over all the earth.

And in that day thou shalt say, O Lord, I will praise thee: though thou wast angry with me, thine anger is turned away, and thou comfortedst me.

2 Behold, God is my salvation; I will trust, and not be afraid: for the Lord Jehovah is my strength and my song; he also is become my salvation.

3 Therefore with joy shall ye draw water out of the wells of salvation.

4 And in that day shall ye say, Praise the Lord, call upon his name, declare his doings among the people, make mention that his name is exalted.

2 And God spake unto Moses, and said unto him, I am the Lord:

3 And I appeared unto Abraham, unto Isaac, and unto Jacob, by the name of God Almighty, but by my name Jehovah was I not known to them.

3 And Abraham rose up early in the morning, and saddled his ass, and took two of his young men with him, and Isaac his son, and clave the wood for the burnt offering, and rose up, and went unto the place of which God had told him.

4 Then on the third day Abraham lifted up his eyes, and saw the place afar off.

5 And Abraham said unto his young men, Abide ye here with the ass; and I and the lad will go yonder and worship, and come again to you.

6 And Abraham took the wood of the burnt offering, and laid it upon Isaac his son; and he took the fire in his hand, and a knife; and they went both of them together.

7 And Isaac spake unto Abraham his father, and said, My father: and he said, Here am I, my son. And he said, Behold the fire and the wood: but where is the lamb for a burnt offering?

8 And Abraham said, My son, God will provide himself a lamb for a burnt offering: so they went both of them together.

9 And they came to the place which God had told him of; and Abraham built an altar there, and laid the wood in order, and bound Isaac his son, and laid him on the altar upon the wood.

10 And Abraham stretched forth his hand, and took the knife to slay his son.

11 And the angel of the Lord called unto him out of heaven, and said, Abraham, Abraham: and he said, Here am I.

12 And he said, Lay not thine hand upon the lad, neither do thou any thing unto him: for now I know that thou fearest God, seeing thou hast not withheld thy son, thine only son from me.

13 And Abraham lifted up his eyes, and looked, and behold behind him a ram caught in a thicket by his horns: and Abraham went and took the ram, and offered him up for a burnt offering in the stead of his son.

14 And Abraham called the name of that place Jehovahjireh: as it is said to this day, In the mount of the Lord it shall be seen.