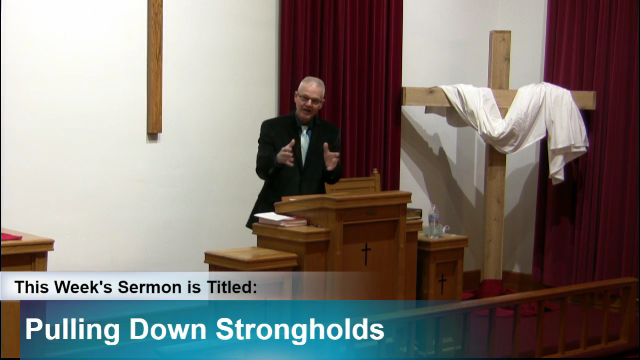 Now I, Paul, myself am pleading with you by the meekness and gentleness of Christ—who in presence am lowly among you, but being absent am bold toward you. 2 But I beg you that when I am present I may not be bold with that confidence by which I intend to be bold against some, who think of us as if we walked according to the flesh. 3 For though we walk in the flesh, we do not war according to the flesh. 4 For the weapons of our warfare are not carnal but mighty in God for pulling down strongholds, 5 casting down arguments and every high thing that exalts itself against the knowledge of God, bringing every thought into captivity to the obedience of Christ, 6 and being ready to punish all disobedience when your obedience is fulfilled.

7 Do you look at things according to the outward appearance? If anyone is convinced in himself that he is Christ’s, let him again consider this in himself, that just as he is Christ’s, even so we are Christ’s. 8 For even if I should boast somewhat more about our authority, which the Lord gave us for edification and not for your destruction, I shall not be ashamed— 9 lest I seem to terrify you by letters. 10 “For his letters,” they say, “are weighty and powerful, but his bodily presence is weak, and his speech contemptible.” 11 Let such a person consider this, that what we are in word by letters when we are absent, such we will also be in deed when we are present.

21 “Not everyone who says to Me, ‘Lord, Lord,’ shall enter the kingdom of heaven, but he who does the will of My Father in heaven. 22 Many will say to Me in that day, ‘Lord, Lord, have we not prophesied in Your name, cast out demons in Your name, and done many wonders in Your name?’ 23 And then I will declare to them, ‘I never knew you; depart from Me, you who practice lawlessness!’

13 For such are false apostles, deceitful workers, transforming themselves into apostles of Christ. 14 And no wonder! For Satan himself transforms himself into an angel of light. 15 Therefore it is no great thing if his ministers also transform themselves into ministers of righteousness, whose end will be according to their works.

10 For as many as are of the works of the law are under the curse; for it is written, “Cursed is everyone who does not continue in all things which are written in the book of the law, to do them.” 11 But that no one is justified by the law in the sight of God is evident, for “the just shall live by faith.” 12 Yet the law is not of faith, but “the man who does them shall live by them.”

13 Christ has redeemed us from the curse of the law, having become a curse for us (for it is written, “Cursed is everyone who hangs on a tree”)

16 I pray that from his glorious, unlimited resources he will empower you with inner strength through his Spirit. 17 Then Christ will make his home in your hearts as you trust in him. Your roots will grow down into God’s love and keep you strong. 18 And may you have the power to understand, as all God’s people should, how wide, how long, how high, and how deep his love is. 19 May you experience the love of Christ, though it is too great to understand fully. Then you will be made complete with all the fullness of life and power that comes from God.

3 I thank God, whom I serve with a pure conscience, as my forefathers did, as without ceasing I remember you in my prayers night and day, 4 greatly desiring to see you, being mindful of your tears, that I may be filled with joy, 5 when I call to remembrance the genuine faith that is in you, which dwelt first in your grandmother Lois and your mother Eunice, and I am persuaded is in you also. 6 Therefore I remind you to stir up the gift of God which is in you through the laying on of my hands. 7 For God has not given us a spirit of fear, but of power and of love and of a sound mind.