Sermon – “Some Were Persuaded” 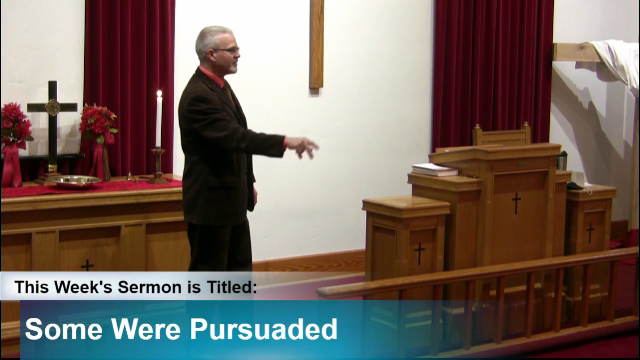 16 Now when we came to Rome, the centurion delivered the prisoners to the captain of the guard; but Paul was permitted to dwell by himself with the soldier who guarded him.

17 And it came to pass after three days that Paul called the leaders of the Jews together. So when they had come together, he said to them: “Men and brethren, though I have done nothing against our people or the customs of our fathers, yet I was delivered as a prisoner from Jerusalem into the hands of the Romans, 18 who, when they had examined me, wanted to let me go, because there was no cause for putting me to death. 19 But when the Jews spoke against it, I was compelled to appeal to Caesar, not that I had anything of which to accuse my nation. 20 For this reason therefore I have called for you, to see you and speak with you, because for the hope of Israel I am bound with this chain.”

21 Then they said to him, “We neither received letters from Judea concerning you, nor have any of the brethren who came reported or spoken any evil of you. 22 But we desire to hear from you what you think; for concerning this sect, we know that it is spoken against everywhere.”

23 So when they had appointed him a day, many came to him at his lodging, to whom he explained and solemnly testified of the kingdom of God, persuading them concerning Jesus from both the Law of Moses and the Prophets, from morning till evening. 24 And some were persuaded by the things which were spoken, and some disbelieved. 25 So when they did not agree among themselves, they departed after Paul had said one word: “The Holy Spirit spoke rightly through Isaiah the prophet to our fathers, 26 saying,

28 “Therefore let it be known to you that the salvation of God has been sent to the Gentiles, and they will hear it!” 29 And when he had said these words, the Jews departed and had a great dispute among themselves.

30 Then Paul dwelt two whole years in his own rented house, and received all who came to him, 31 preaching the kingdom of God and teaching the things which concern the Lord Jesus Christ with all confidence, no one forbidding him.

20 And when the blood of Your martyr Stephen was shed, I also was standing by consenting to his death, and guarding the clothes of those who were killing him.’

4 Then the serpent said to the woman, “You will not surely die. 5 For God knows that in the day you eat of it your eyes will be opened, and you will be like God, knowing good and evil.”

13 For you have said in your heart:
‘I will ascend into heaven,
I will exalt my throne above the stars of God;
I will also sit on the mount of the congregation
On the farthest sides of the north;
14 I will ascend above the heights of the clouds,
I will be like the Most High.’

“Behold, I lay in Zion a stumbling stone and rock of offense,
And whoever believes on Him will not be put to shame.”

12 For the word of God is living and powerful, and sharper than any two-edged sword, piercing even to the division of soul and spirit, and of joints and marrow, and is a discerner of the thoughts and intents of the heart. 13 And there is no creature hidden from His sight, but all things are naked and open to the eyes of Him to whom we must give account.

With Christ as my witness, I speak with utter truthfulness. My conscience and the Holy Spirit confirm it. 2 My heart is filled with bitter sorrow and unending grief 3 for my people, my Jewish brothers and sisters. I would be willing to be forever cursed—cut off from Christ!—if that would save them. 4 They are the people of Israel, chosen to be God’s adopted children. God revealed his glory to them. He made covenants with them and gave them his law. He gave them the privilege of worshiping him and receiving his wonderful promises.

21 Greet every saint in Christ Jesus. The brethren who are with me greet you. 22 All the saints greet you, but especially those who are of Caesar’s household.

23 The grace of our Lord Jesus Christ be with you all. Amen.