Sermon – “The Deceiver Is Deceived” 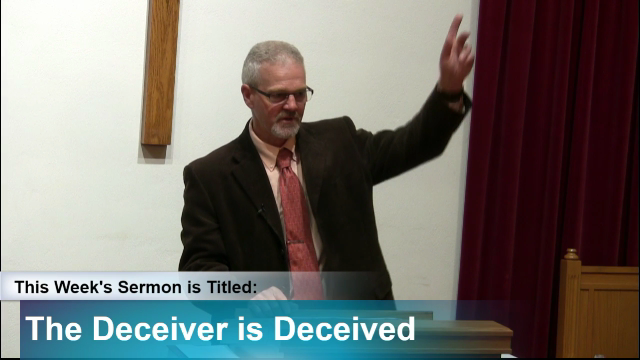 15 Then Laban said to Jacob, “Because you are my relative, should you therefore serve me for nothing? Tell me, what should your wages be?” 16 Now Laban had two daughters: the name of the elder was Leah, and the name of the younger was Rachel. 17 Leah’s eyes were delicate, but Rachel was beautiful of form and appearance.

18 Now Jacob loved Rachel; so he said, “I will serve you seven years for Rachel your younger daughter.”

19 And Laban said, “It is better that I give her to you than that I should give her to another man. Stay with me.” 20 So Jacob served seven years for Rachel, and they seemed only a few days to him because of the love he had for her.

21 Then Jacob said to Laban, “Give me my wife, for my days are fulfilled, that I may go in to her.” 22 And Laban gathered together all the men of the place and made a feast. 23 Now it came to pass in the evening, that he took Leah his daughter and brought her to Jacob; and he went in to her. 24 And Laban gave his maid Zilpah to his daughter Leah as a maid. 25 So it came to pass in the morning, that behold, it was Leah. And he said to Laban, “What is this you have done to me? Was it not for Rachel that I served you? Why then have you deceived me?”

26 And Laban said, “It must not be done so in our country, to give the younger before the firstborn. 27 Fulfill her week, and we will give you this one also for the service which you will serve with me still another seven years.”

23 And whatever you do, do it heartily, as to the Lord and not to men, 24 knowing that from the Lord you will receive the reward of the inheritance; for you serve the Lord Christ.

With my whole heart I have sought You;
Oh, let me not wander from Your commandments!
11 Your word I have hidden in my heart,
That I might not sin against You.
12 Blessed are You, O Lord!
Teach me Your statutes.
13 With my lips I have declared
All the judgments of Your mouth.
14 I have rejoiced in the way of Your testimonies,
As much as in all riches.
15 I will meditate on Your precepts,
And contemplate Your ways.
16 I will delight myself in Your statutes;
I will not forget Your word.

16 Then they journeyed from Bethel. And when there was but a little distance to go to Ephrath, Rachel labored in childbirth, and she had hard labor. 17 Now it came to pass, when she was in hard labor, that the midwife said to her, “Do not fear; you will have this son also.” 18 And so it was, as her soul was departing (for she died), that she called his name Ben-Oni; but his father called him Benjamin. 19 So Rachel died and was buried on the way to Ephrath (that is, Bethlehem). 20 And Jacob set a pillar on her grave, which is the pillar of Rachel’s grave to this day.

19 If in this life only we have hope in Christ, we are of all men the most pitiable.