Sermon – The Dreamer and His Coat of Many Colors 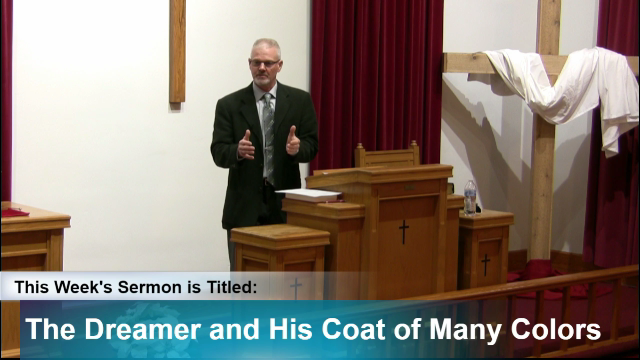 Now Jacob dwelt in the land where his father was a stranger, in the land of Canaan. 2 This is the history of Jacob.

Joseph, being seventeen years old, was feeding the flock with his brothers. And the lad was with the sons of Bilhah and the sons of Zilpah, his father’s wives; and Joseph brought a bad report of them to his father.

5 Now Joseph had a dream, and he told it to his brothers; and they hated him even more. 6 So he said to them, “Please hear this dream which I have dreamed: 7 There we were, binding sheaves in the field. Then behold, my sheaf arose and also stood upright; and indeed your sheaves stood all around and bowed down to my sheaf.”

8 And his brothers said to him, “Shall you indeed reign over us? Or shall you indeed have dominion over us?” So they hated him even more for his dreams and for his words.

9 Then he dreamed still another dream and told it to his brothers, and said, “Look, I have dreamed another dream. And this time, the sun, the moon, and the eleven stars bowed down to me.”

10 So he told it to his father and his brothers; and his father rebuked him and said to him, “What is this dream that you have dreamed? Shall your mother and I and your brothers indeed come to bow down to the earth before you?” 11 And his brothers envied him, but his father kept the matter in mind.

14 Then he said to him, “Please go and see if it is well with your brothers and well with the flocks, and bring back word to me.” So he sent him out of the Valley of Hebron, and he went to Shechem.

15 Now a certain man found him, and there he was, wandering in the field. And the man asked him, saying, “What are you seeking?”

16 So he said, “I am seeking my brothers. Please tell me where they are feeding their flocks.”

17 And the man said, “They have departed from here, for I heard them say, ‘Let us go to Dothan.’ ” So Joseph went after his brothers and found them in Dothan.

18 Now when they saw him afar off, even before he came near them, they conspired against him to kill him. 19 Then they said to one another, “Look, this dreamer is coming! 20 Come therefore, let us now kill him and cast him into some pit; and we shall say, ‘Some wild beast has devoured him.’ We shall see what will become of his dreams!”

26 So Judah said to his brothers, “What profit is there if we kill our brother and conceal his blood? 27 Come and let us sell him to the Ishmaelites, and let not our hand be upon him, for he is our brother and our flesh.” And his brothers listened. 28 Then Midianite traders passed by; so the brothers pulled Joseph up and lifted him out of the pit, and sold him to the Ishmaelites for twenty shekels of silver. And they took Joseph to Egypt.

12 Hatred stirs up strife,
But love covers all sins.

9 But Pilate answered them, saying, “Do you want me to release to you the King of the Jews?” 10 For he knew that the chief priests had handed Him over because of envy.

18 “If the world hates you, remember that it hated me first. 19 The world would love you as one of its own if you belonged to it, but you are no longer part of the world. I chose you to come out of the world, so it hates you. 20 Do you remember what I told you? ‘A slave is not greater than the master.’ Since they persecuted me, naturally they will persecute you. And if they had listened to me, they would listen to you. 21 They will do all this to you because of me, for they have rejected the one who sent me. 22 They would not be guilty if I had not come and spoken to them. But now they have no excuse for their sin. 23 Anyone who hates me also hates my Father. 24 If I hadn’t done such miraculous signs among them that no one else could do, they would not be guilty. But as it is, they have seen everything I did, yet they still hate me and my Father. 25 This fulfills what is written in their Scriptures: ‘They hated me without cause.’

26 “But I will send you the Advocate—the Spirit of truth. He will come to you from the Father and will testify all about me. 27 And you must also testify about me because you have been with me from the beginning of my ministry.