Sermon – “The Glory of God’s Creation” 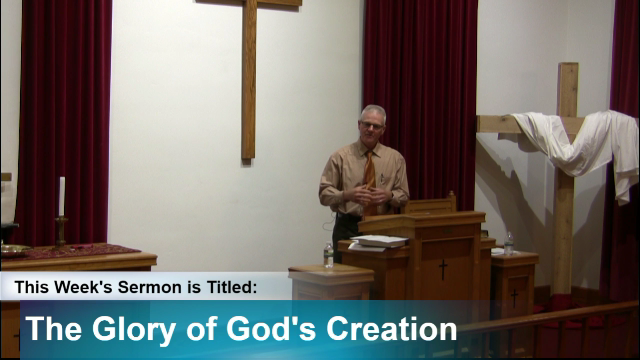 The heavens declare the glory of God;
And the firmament shows His handiwork.
2 Day unto day utters speech,
And night unto night reveals knowledge.
3 There is no speech nor language
Where their voice is not heard.
4 Their line has gone out through all the earth,
And their words to the end of the world.

In them He has set a tabernacle for the sun,
5 Which is like a bridegroom coming out of his chamber,
And rejoices like a strong man to run its race.
6 Its rising is from one end of heaven,
And its circuit to the other end;
And there is nothing hidden from its heat.

16 All Scripture is given by inspiration of God, and is profitable for doctrine, for reproof, for correction, for instruction in righteousness, 17 that the man of God may be complete, thoroughly equipped for every good work.

In the beginning God created the heavens and the earth. 2 The earth was without form, and void; and darkness was on the face of the deep. And the Spirit of God was hovering over the face of the waters.

Thus says God the Lord,
Who created the heavens and stretched them out,
Who spread forth the earth and that which comes from it,
Who gives breath to the people on it,
And spirit to those who walk on it:

Who has measured the waters in the hollow of His hand,
Measured heaven with a span
And calculated the dust of the earth in a measure?
Weighed the mountains in scales
And the hills in a balance?

20 Then God said, “Let the waters abound with an abundance of living creatures, and let birds fly above the earth across the face of the firmament of the heavens.” 21 So God created great sea creatures and every living thing that moves, with which the waters abounded, according to their kind, and every winged bird according to its kind. And God saw that it was good. 22 And God blessed them, saying, “Be fruitful and multiply, and fill the waters in the seas, and let birds multiply on the earth.” 23 So the evening and the morning were the fifth day.

For You formed my inward parts;
You covered me in my mother’s womb.
14 I will praise You, for I am fearfully and wonderfully made;
Marvelous are Your works,
And that my soul knows very well.

The heavens declare the glory of God;
And the firmament shows His handiwork.

1 O Lord, our Lord,
How excellent is Your name in all the earth,
Who have set Your glory above the heavens!

3 When I consider Your heavens, the work of Your fingers,
The moon and the stars, which You have ordained,
4 What is man that You are mindful of him,
And the son of man that You visit him?