Sermon – The Work of the Cross 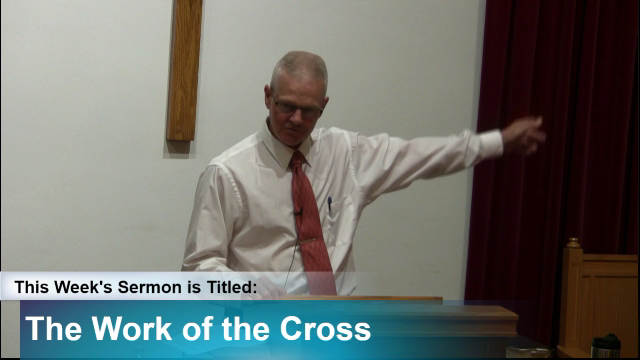 32 There were also two others, criminals, led with Him to be put to death. 33 And when they had come to the place called Calvary, there they crucified Him, and the criminals, one on the right hand and the other on the left. 34 Then Jesus said, “Father, forgive them, for they do not know what they do.”

And they divided His garments and cast lots. 35 And the people stood looking on. But even the rulers with them sneered, saying, “He saved others; let Him save Himself if He is the Christ, the chosen of God.”

36 The soldiers also mocked Him, coming and offering Him sour wine, 37 and saying, “If You are the King of the Jews, save Yourself.”

38 And an inscription also was written over Him in letters of Greek, Latin, and Hebrew:

THIS IS THE KING OF THE JEWS.

39 Then one of the criminals who were hanged blasphemed Him, saying, “If You are the Christ, save Yourself and us.”

40 But the other, answering, rebuked him, saying, “Do you not even fear God, seeing you are under the same condemnation? 41 And we indeed justly, for we receive the due reward of our deeds; but this Man has done nothing wrong.” 42 Then he said to Jesus, “Lord, remember me when You come into Your kingdom.”

43 And Jesus said to him, “Assuredly, I say to you, today you will be with Me in Paradise.”

44 Now it was about the sixth hour, and there was darkness over all the earth until the ninth hour. 45 Then the sun was darkened, and the veil of the temple was torn in two. 46 And when Jesus had cried out with a loud voice, He said, “Father, ‘into Your hands I commit My spirit.’ ” Having said this, He breathed His last.

47 So when the centurion saw what had happened, he glorified God, saying, “Certainly this was a righteous Man!”

48 And the whole crowd who came together to that sight, seeing what had been done, beat their breasts and returned. 49 But all His acquaintances, and the women who followed Him from Galilee, stood at a distance, watching these things.

Therefore I will divide Him a portion with the great,
And He shall divide the spoil with the strong,
Because He poured out His soul unto death,
And He was numbered with the transgressors,
And He bore the sin of many,
And made intercession for the transgressors.

23 his body shall not remain overnight on the tree, but you shall surely bury him that day, so that you do not defile the land which the Lord your God is giving you as an inheritance; for he who is hanged is accursed of God.

9 And they sang a new song, saying:

“You are worthy to take the scroll,
And to open its seals;
For You were slain,
And have redeemed us to God by Your blood
Out of every tribe and tongue and people and nation,

37 And Jesus cried out with a loud voice, and breathed His last.

38 Then the veil of the temple was torn in two from top to bottom. 39 So when the centurion, who stood opposite Him, saw that He cried out like this and breathed His last, he said, “Truly this Man was the Son of God!”